At the dawn of history, one woman's epic adventure reveals the story of mankind. These are the six epic novels in the Earth's Children® Series: The Land of Painted Caves, The Shelters of Stone, The Plains of Passage, The Mammoth Hunters, The Valley of the Horses, The Clan of The Cave Bear.

The Land of Painted Caves

Book 6 of the Earth's Children® Series

It is summer in the land of the Zelandonii, and it is nearly time for the next Summer Meeting. Ayla finds it is time to strike a balance between being a mother to her daughter, Jonayla, and a loving mate to Jondalar, while pursuing the fascinating knowledge and power of the Zelandoni, lead by the charismatic First Among Those Who Served the Mother of the Zelandoni of the Ninth Cave.

With The Land of Painted Caves, Auel gives fans the epic they've been waiting for, and she does not disappoint as she continues the story of Ayla and Jondalar and their little daughter Jonayla. Once again Jean Auel combines her brilliant narrative skills and appealing characters with a remarkable re-creation of the way life was lived tens of thousands of years ago. The terrain, dwelling places, longings, beliefs, creativity, and daily lives of her characters are as real to the reader as today's news. The Land of Painted Caves is a brilliant achievement by one of the world's most beloved authors. 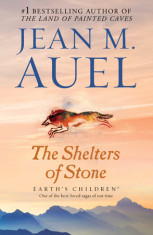 The Shelters of Stone

Book 5 of the Earth's Children® Series

“[In Ayla] Auel may be creating one of the most believable characters in English fiction--one to rank with Sherlock Holmes, Scarlett O'Hara and a handful of others."— UPI

Ayla, Jondalar, and their animal companions have finally arrived at Jondalar's home to meet his people, the Zelandonii. To Ayla, this exciting society is filled with fascinating new artifacts, customs, and mores. Even their homes, the abri or caves, are new to her, and the soaring vertical limestone cliffs leave her in awe. But while many of the Zelandonii are welcoming, especially Jondalar's family, there are those who consider her strange, and threatening. Who is this odd-spoken foreigner accompanied by a wolf, who communicates with and rides on horses? Worst of all is her passionate defense of Flatheads, the ones she calls the Clan; she seems to consider them … people!

Once again, Ayla finds that there is no easy path to acceptance. She and Jondalar move toward the Summer Meeting at which they are to be formally mated–to tie the knot and spend the requisite 14 days in isolation to prove they can live with each other. But hostility erupts and Ayla must use her uncanny intelligence, instincts, and precious gifts for both hunting and healing to prove not only that she is worthy to be with Jondalar, but is worthy of respect and acceptance.

Jean Auel is at her very best in this superbly textured creation of a prehistoric society. The Shelters of Stone is a sweeping story of love and danger, with all the wonderful detail based on meticulous research that makes her novels unique. 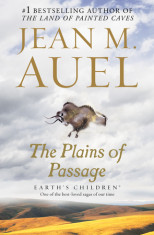 The Plains of Passage

Book 4 of the Earth's Children® Series

Ayla has no memory of her own people: she has always been “other.” Jondalar burns with the need to reconnect with his people, to return home. So together they leave the comforting warmth of the Mamutoi hearths to trek through the forbidding Ice Age grasslands of what will be Europe tens of thousands of years later.

With the animal companions they have both come to love, they set out on a dangerous and daring journey--away from the embrace of the friends both have gained while staying with the mammoth hunters. Their odyssey spans a beautiful but sparsely populated and treacherous continent, casting the pair among strangers.

Some will be intrigued by Ayla and Jondalar, with their many innovative skills; others will avoid them, threatened by what they cannot understand; and some will threaten them. Jondalar is taken captive by a madwoman and her Wolf Women and must be rescued by Ayla and Wolf in a daring raid. Ayla herself will be challenged when the little party must cross the inhospitable glacier.

Throughout, Ayla finds her sleep disrupted by dreams in which Creb, the long-dead Mog-ur of the Clan, shows her a vision of an unusual overhanging rock. It is a place she has never seen–a place she finds a little strange, a place she knows she will find on this journey. But she does not know if it is a place to fear, or if it is the home she has always yearned to have. 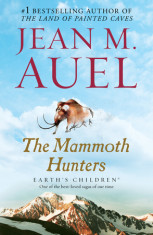 Book 3 of the Earth's Children® Series

The epic journey begun in The Clan of the Cave Bear, and furthered in The Valley of Horses continues in this stunning, vivid adventure. Once again Jean M. Auel opens the door of a time long past to reveal an age of wonder and danger at the dawn of the modern human race.

Riding a horse called Whinney and accompanied by Jondalar, the man she saved when wounded by a cave lion and has grown to love, Ayla comes to the land of the Mamutoi--the Mammoth Hunters. She has finally found the ones the Clan called “The Others,” people who look like her.

Though Ayla must learn their different customs and language, she is adopted because of her remarkable hunting ability, singular healing skills, and uncanny fire-making technique. Bringing back the single pup of a lone wolf she has killed, Ayla amazes the Mamutoi by demonstrating how she tames animals. Even though she faces some prejudice when it is revealed that she lived her early years among the Clan–the ones called “Flatheads”–Ayla at long last finds women friends and begins to put the pain of her past behind her.

As Ayla becomes more a part of Mamutoi society, she meets Ranec, the dark-skinned master carver of ivory. She becomes enamored and her passion for this new man makes Jondalar fiercely jealous. He compensates by avoiding her. Because of her early life with the Clan, his behavior is mystifying to her. She mistakes his anger and hurt for disinterest, and turns more fully to the charismatic Ranec. Throughout the icy winter she shelters with the Mamutoi, while Jondalar broods over his disappointment.

Then it is summer again, and as the great mammoth hunt approaches with its annual Matrimonial ritual, Ayla must finally choose: to stay with the Mamutoi who have become friends and mate with Ranec, or to choose Jondalar, and leave this sanctuary for the hardship of a journey toward his home many miles, and many adventures, away. 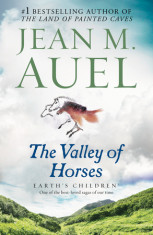 The Valley of Horses

Book 2 of the Earth's Children® Series

“It has magic.”— Daily Telegraph

This unforgettable epic carries readers back to the awesome mysteries of the exotic, primeval world of The Clan of the Cave Bear, and to Ayla, now fourteen and growing into a beautiful and courageous young woman.

Cruelly cast out by Broud, the new leader of the ancient Clan that adopted her as a child, Ayla leaves those she loves behind and travels alone through a stark, open land filled with dangerous animals but few people. She is searching for “The Others,” tall and fair people like herself. The short summer gives her little time to look, and when she finds a sheltered valley with a herd of hardy steppe horses, she decides to stay and prepare for the long glacial winter ahead.

Living with the Clan has taught Ayla many skills but not real hunting. She finally knows she can survive when she traps a horse in a pit, which gives her meat and a warm pelt for the winter. But fate has bestowed on her a greater gift, an orphaned foal with which she develops a unique kinship. One winter extends to more; she discovers a way to make fire more quickly and a wounded cave lion cub joins her unusual family. Yet her beloved animals don't fulfill her restless need for human companionship.

Meanwhile, two brothers of the Zelandonii are on a quest of their own. Together they have left the comfort of their hearths: one for the joy of adventure, the other to escape his hopeless obsession for a woman he can never have. They encounter other men of their own kind, and some of the kind they call “Flatheads”–the men and woman of the Clans. Many of these encounters teach them fascinating lessons but some put their lives and hearts in jeopardy.

One day Ayla is shocked to hear the sound of a man screaming in pain. The younger brother of the two has been severely wounded by the very cave lion she adopted. The other brother is seriously wounded. Ayla heals tall, handsome Jondalar, who brings her a language to speak and an awakening of love and desire. But Ayla is torn between her fear of leaving her valley and her hope of living with her own kind. 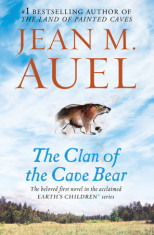 The Clan of the Cave Bear

Book 1 of the Earth's Children® Series

In this first book of the beloved Earth's Children® series, Jean M. Auel takes readers back to the dawn of mankind and sweeps them up into the amazing and wonderful world of Ayla, one of the most remarkable heroines ever imagined.

Over 30,000 years ago, in a world we know but would not recognize, a young girl of five plays by herself on a creek bank. Suddenly, her world shifts, as a cataclysmic earthquake leaves her an orphan in a harsh Ice Age landscape.

A way away, a group of people now called Neanderthals also finds their world changed, as the quake destroys the cave they've called home. They must journey to find a new place to live.

It is during this odyssey that the Clan of the Cave Bear first encounters the lost child of “The Others” named Ayla. She is starving and half-dead from a wound on her thigh made by a cave lion defending her cubs. A medicine woman from the Clan, named Iza, receives permission to try to heal her. Despite her advanced pregnancy and the large load she is already carrying, Iza will not leave the child to the elements. Iza carries her along with the Clan, determined to heal her, and survive this trial. Iza and Creb, the old Mog-ur (magician), grow to love her, and as Ayla learns the ways of the Clan and Iza's way of healing, most come to accept her. But the brutal and proud youth who is destined to become their next leader sees her differences as a threat to his authority. He develops a deep and abiding hatred for the strange girl of the Others who lives in their midst, and is determined to get his revenge.

Thus begins the epic tale of Ayla–blonde, blue-eyed, straight-legged, and vocal--considered bizarre and unattractive by her adoptive Clan. In Ayla's story readers find what very well may be the story of human survival, for it is by wit, instinct, adaptation, and gathering knowledge that Ayla thrives among a people who are not like her, in a society that sees her as strange, in a world where elements, animals, and the enmity of others make surviving each day a challenge.